by Scott and Lynne (Downey, CA) Who Share About Giving Sports Gifts

(A Couple of Fellow Football Fanatics) 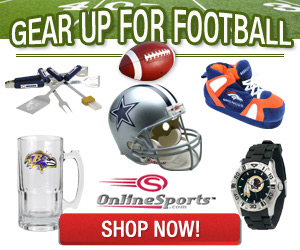 Our Pastor comes from San Diego. He's a big Charger's fan, a lesser of a Padres fan. The truth is that the Charger's do o.k. but usually don't always do that great.

Sports fans are loyal and he's still a fan though. That means the wins and losses are felt down to his soul, so we thought we'd give him a series of smaller gifts, over the 4 or so weeks of October, for Pastor Appreciation Month.

I bought a bunch of quilt squares off of eBay, Charger themed ones defined by the team colors -- dark blue, white, gold, then the actual Chargers material, very cheap on eBay.

I made him a remote holder for the edge of his chair, to drape over both sides, it had pockets, like three of them, since missing the TV remote is like a major crisis for a guy, especially during a game. We then put a cheap leftover remote in one of the "sleeves" to let him know what it was for.

If I gave myself grades for my efforts, it would be Craftsmanship? D+ effort A+, creativity... B?

A lot of smaller gifts were given to our San Diego Charger Fan and were given each week. The sports theme pastor appreciation gifts included:

These football memorabilia gifts took a lot of personal effort. We decided to keep our NFL gag gift project simple as to gift wrapping so we just put most of them in brown lunch bags with "Pastor" in Sharpie pen on it, maybe including a cheap greeting card every other week, under his box in the church foyer.

Guys hate to wrap anyway, and the sports gift theme seemed just right in their brown bag gift wrapping instead of a "floofy" box with ribbons.

It was neat to stretch giving the gifts out over the month, and the total cost of buying sports gifts was probably about $35 to $40. We think he felt very special because of this unexpected approach to pastor appreciation gift giving.

It's totally not too pricey considering the amount of Spiritual priceless manna we get all the year long.

Sports Gifts For A Good Sport

It was great at Bible study when he mentioned the Charger Fan Pacifier, as that week the Charger's did terrible, it was really comical as he mentioned how the timing was good and all laughed at his Charger gag gift.

Except one gift that included a card that was signed, we remained unknown, so we could enjoy his true reactions, and not be recognized, or perhaps disliked, for a bad gift! :-)

(Editor's note) If so, check out this link to a page where you will find

Another Great Resource of Sports Memorabilia


Join in and write your own page! It's easy to do. How? Simply click here to return to Pastor Appreciation Gift Ideas.

Yes, I acknowledge that I may receive a commission should  you click on  a link or banner when searching for Pastor Appreciation gifts or ideas.

For example,  as an Amazon Associate I earn from qualifying  purchases made by visitors from this website.

I may also recommend other products or websites for which I may receive compensation if you were to click on the link taking you to a recommended site.

Copyright 2005-2019 - Chaplain Paul Slater, San Diego, CA We are a participants in the Amazon Services LLC Associates Program. As an Amazon Associate I earn from qualifying purchases.